The new shallow cultivator with rotor is an equipment for modern agriculture, which partially allows to avoid the usage of total weed killer chemicals.

There are 2 main units of the machine: 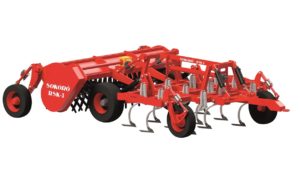 The tines are in 3 rows, their overlap is 70 mm, and they work with an equal working depth. They burst the plants root perfectly.

There are 75 tines in the cylinder, which work in the depth of 30-50 mm. The sprigs pull out the weed with the root, and send them directly into the air. The soil arrives to the ground earlier than the stalk with the root. The chance for the weed to revive is very little. The formed mulch-layer decreases the steaming of humidity and CO, and assists the expansion of humus-layer.

Working speed of the machine is ideally 5-6 km/h. To keep the depth equal, there are holder wheels, which allow rapid and simple adjustment.